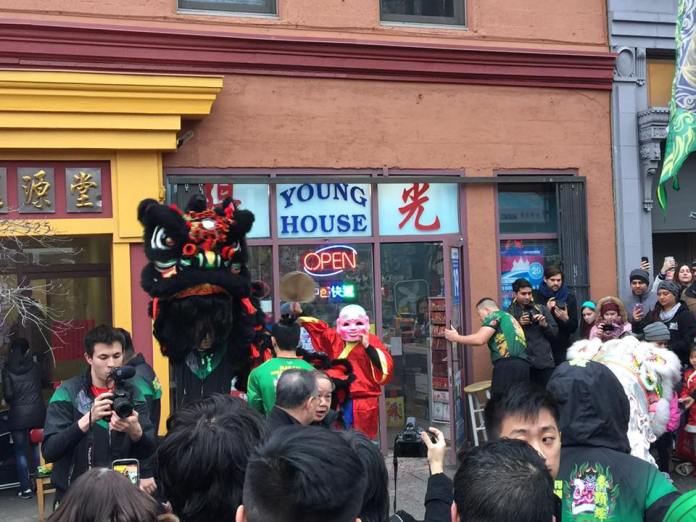 Chinese New Year celebration and the familiar dragon dance weaves their magic around the city.  Drums and cymbals clanging and beating an ancient rhythms.  Beating and calling the ancient gods to come down from the heavens and bless the stores and homes.

I got to accidentally touch one of the dragon dances as they shimmied past me.  I saw others intentionally touch the dragons as they danced down the street.

It is as if touching these magnificent representation of mythical creatures makes them closer to heaven and in some ways, a closer connection to the realm of the mysterious.  Gods and goddesses, monsters and mythical creatures, all interwoven into this fabric of life.  Not long ago, we prayed to these immortals to have pity on us.  We find ourselves praying again.  And now we take action to the streets.

In these confusing and politically charged time, we are finding ourselves praying again and also banding together to form an allegiance with others.  To strike down the unjust and to provide comfort and support to those in need.

A good friend of mine commented that watching the dragon dance through Seattle’s Chinatown is a part of her childhood memory.  The diverse culture being experienced is her America.  Her melting pot of something greater being shared.  Not the bland, white America that has sprouted across the country like mushroom spores infecting the suburbs.  Hiding behind the false media feeds and reality show television.  That is not culture.  That is media fed propaganda.  That is not my America.

By performing the dragon dance in Seattle’s Lunar New Year, we are demonstrating that diversity lives in this city.

This is how we keep traditions alive.  This is how we ensure that culture, all cultures are not wiped out and that every culture does matter.  This is our melting pot.  We all come from somewhere, our parents, whether immigrants or refugees came from somewhere.  To make a better life for ourselves and our families.  That’s what makes it the United States of America.

United We Stand.  Divided We Fall.